Ultimately, like, the process of climbing is very rewarding to people.

It’s very difficult physically, but it’s also a very kind of cerebral sport. It’s slow and methodical and you have to think. You can’t move very well when you’re scared. You have to be able to control that fear and maintain your breathing because there’s very real consequences when you make mistakes.

You can make a wrong move when you’re free-soloing and you fall hundreds or thousands of feet and die.

In college I found… I skied on the ski team and then I am found climbing and so after college, you know, I went to the Bay Area and I was looking for a job, trying to, you know, thinking that I would find something in the professional realm  but then, I just didn’t, I couldn’t get myself excited about it, and so I kind of made up my mind. I had this great idea. I was like: “hey Mom, Dad, I’m going to take a year off.  I’m just going to get it out of my system . I’m going to climb and ski full-time. Don’t freak out , it’s it’s really temporary. I just, I got to do it for me”.

So, essentially their worst nightmare was realized  when probably close to seven years later I was still living in the back of my car and just doing odds and ends for jobs, shovelling roofs and waiting tables. But really, you know, in love with what I was doing and where I was spending my time. I would wake up in the back of my Subaru in Yosemite or in the Eastern Sierras or in the Tetons, and I would just think like, you know, there’s no other place that I would rather be. I just felt so fortunate and every day I would, you know, I knew that since I wasn’t doing anything else, I was going to throw myself  at climbing and skiing,  and really kind of taking myself as far as I could in that realm.

So, Yosemite was a very kind of influential home for me. I spent a lot of time there over the course of seven years. I Made a lot of friends. I felt like I’d found my community there. People were really passionate about what they were doing and every day, you know, you’d go out and climb, and… I mean, really living the good life.

After spending a lot of time there, you know, my aspirations changed, and I really wanted to go and take what I learned in Yosemite to some of the greater ranges  of the world.  And it was in Yosemite that I picked up a camera for the first time.  I took a photo with a friend’s camera who wanted to be a photographer. I took a photo with it and he eventually tried to sell this photos and a client bought the one photo and it happened to be the one that I took. So, and they paid me and at the time, you know, I could live on nothing forever, basically, and they paid $500 five hundred dollars for this photo.

Of course, now I know for the usages that they used it for, they should have paid me like many thousands of dollars, but at the time I didn’t know and I was like: “if I take one photo a month, I could do this forever”, you know,  and I was like: “okay, this is awesome ”, so… I wish, I, you know, I’m sure some photographers probably cringe and they’re like:” God, he has no sense of creativity or the tradition of photography”, but that was really how I started. I didn’t really have a sense of, like, wanting to be an artist or photographer in any other way than to continue what I was doing.

So, I took, you know, a camera and I started to head out into the world and really, you know, you Yosemite is a special place for me because it launched me into this career. And, you know, over the course of the next ten, eleven, twelve years, I travelled the world, and really got to shoot on  some really insane  assignments with some amazing people and some amazing locations. 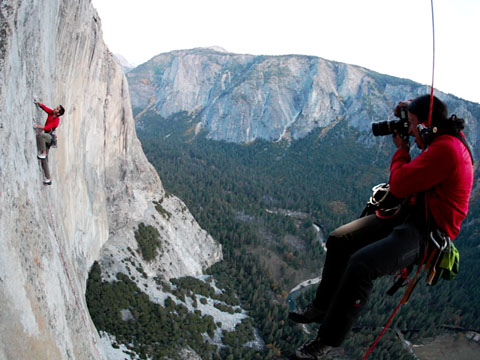