The Neon Demon is a psychological horror film directed by Nicolas Winding Refn that symbolize the vampirism performance of the real world. The film speaks the language of counterculture too and it has the most Lynch style surrealism. Who minds about human damage, as long as it looks good?

Everywhere people fall face the beauty of the main character, Jesse. Three women, the two blonde vamps (Gigi and Sarah) and Ruby will stop at nothing to get rid of her, even cannibalism. Soon, other models in the town of Los Angeles become jealous of Jesse’s youth and vitality and the rest of the fashion industry is jealous of Jesse’s vibrancy (like «the sun» as literally a vampiric model tells to her). In other words, the models are jealous of the industry bigwigs revolving around her, so they want her gone. Unfortunately, models will kill her to be her.

The Neon demon is exactly drawing us our world and why not, our professional work world. Jesse is special and that is linked to danger so this kind of peolple has to stay alert. But she doesn’t do that. She doesn’t stay alert.

Refn’s Neon Demon comes in many forms (a mountain lion that gets into Jesse’s motel room when she leaves the door open…), but we get a glimpse of the Neon demon in its truest form as Jesse walks in the fashion show. She walks towards three hovering neon triangles which seem to appear as if in a vision. When Jesse reaches them, she looks up to see three reflections of herself. The triangles are the satanic symbol of the Neon demon. It’s like the three bad women and generally, it’s like the bad people in the world.

The white triangle is inspired by the work of the architect James Turrel whose works are like sacred spaces. That reference gave the triangle a touch of the spiritual. The colour blue had a lot to do with the Greek myth Narcissus. Then it’s going to transform into red and go from the Alice in Wonderland to the empowered beauty girl. It’s done with just light and mirrors.

Nicolas, the director, although Danish, he spent his adolescence in New York with his filmmaker parents. The Neon Damon is his 10th movie.

Refn is making feel new to us. «It’s oddball», designed to trick the mind. New was Refn’s insistence on filming in the order the story appears on the screen. In Hollywood, it’s seen as wildly impractical, a waste of money. But Refn has worked that way since his debut back in Copenhagen, in 1996. To him, it lets the movie evolve as it goes (it helps that his films have ever less dialogue).

The colour red means danger and it is in every scene with Jena Malone’s Ruby. 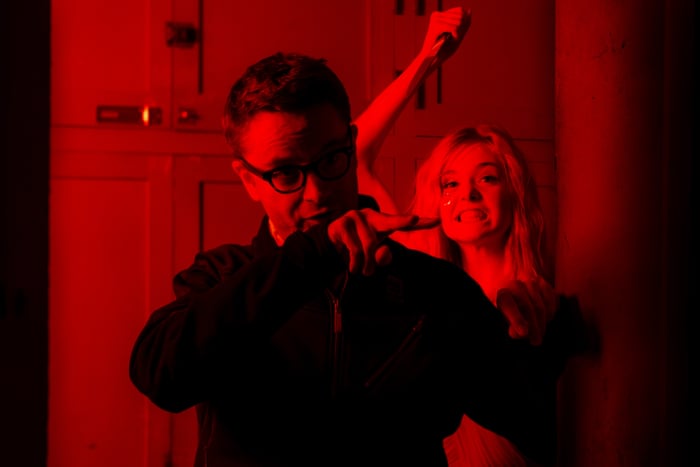 Most of the time the camera is static. Nic wanted the movie to feel like if you were through a photography book. He loved telling the story inside the composition of one shot and cutting them as little as possible. He wants the audience to be able to fill some gaps that are left for the imagination. That’s more interesting to him than conventional narrative storytelling. It’s poetry.

As an artist, it is interesting to be in that one direction and go really extreme. In the game «Is this a murder scene? Is this, really?» you don’t expect the expected. Someone is photographing her and we don’t know if he has just killed her or if he is visiting a crime scene. Then we see her pull out very slowly with the dolly camera and it becomes that it is a photography set.