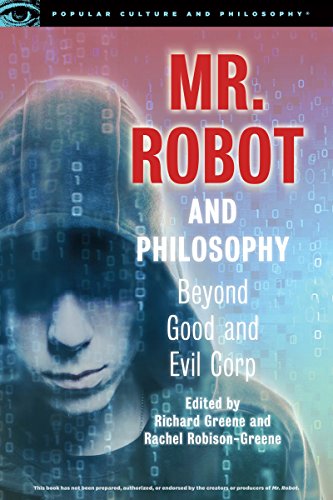 «If you wrestle with monsters, take care you don’t become a monster yourself. Keep staring into the abyss and the abyss will stare right back into you». (Friedrich Nietzsche. Beyond Good and Evil: Prelude to a Philosophy of the Future).

According to the book «MR.ROBOT and philosophy. Beyond good and evil corp», our intentions don’t drive us. Indeed, our higher goals and our higher self does not is the cause of what we do. Nevertheless, there is a group of people who are running the world behind the scenes. They set the world’s rules and regulations which ban all kind of action that break these laws. This group are the top one percent of the top one percent who are at the helm of the multi-national conglomerate, and who hold a large number of people get into debt which is the metaphor of the modern slavery. This colonial world prompt characters to think about rebellion.

And according to Elliot and fsociety, all hackers, what this top group of people is doing is totally undemocratic. In other words, the anger rouse Elliot and fsociety into doing something. So the book suggests that oppressed class should join forces and undertake crucial actions to adress the problem changing the unfair world.

The 5/9 hack do by Elliot and fsociety should legitimize the freedom of the slaved people, compelling the top one percent to submit to these oppressed people. In other words, people should take the steps need to reverse the power system. Indeed, the aim of Elliot 5/9 hack attack is to destroy all the records of debt in the world and, thus, to prevent E Corp keep people in the dark so revelling what is behind the scenes. But this hack attack wreak hadoc in the world as a metaphorical sense of a war, damaging the people who they want to save because of the lack of financial flows. Leading to the thin end of a wedge or paving the way for something better?

The book explores all of philosophical themes that can be found in the American drama thriller television series Mr. Robot.
In 2015, a young man living in New York City, who works at the cybersecurity company Allsafe as a cybersecurity engineer is recruited by Mr. Robot and joins his team of hacktivists known as fsociety. One of their missions is to cancel all consumer debt by encrypting all the data of one of the largest corporations in the world, E Corp which also happens to be Allsafe’s biggest.

Elliot Alderson: A hacker who recognises that global economic structures are remarkably unjust. He has the tools and skills to successfully initiate his revolution to change, but he doesn’t have the strength to carry on without adopting the person of Mr. Robot, an alternative personality of Elliot who takes the form of his dead father.

Mr. Robot: The dangerous illusion and the projection of Elliot’s father as well as an instrument of freedom for Elliot. Furthermore, an insurrectionary anarchist who recruits Elliot into an underground hacker group called fsociety.

Definitely as a conclusive evidence, this book resonates with our time.

«Hello reader»? That’s lame. I’m copying the show. This is a slippery slope.»

(That is how start the book).